To God be the Glory- and God has the last say..

Why would there be rallies if this world was not ready for change?.... It's takes exposing corruption and becoming fed up with it that we become beacon's of light that ignite the members of the body, ready and willing to organize....

It has been documented in an article written about Zimmerman that he had been accused of domestic violence for assaulting an ex-girlfriend and arrested for assaulting a police officer. Whether or not this is valid, we must account for the fact that he pursued Trayvon that evening.  This was based on the prosecutions evidence.  A 911 call from Zimmerman and testimony from Trayvon's friend who was on the phone with him at the time of the incident.

Civilly consider with or without Zimmerman's previous encounters with the law, that this case would have been different had Zimmerman been black.  Forget if Trayvon was White, because we ALL know it would have led to life imprisonment or death. Rather, through historical facts we can conclude that if a black man would have killed him and used Zimmerman's story, it would have led to a life sentence to say the least.  This is considered a "Black on Black" crime which the system has no issues with when it comes to convicting minorities in general.  This man would have been "just" one more infraction.

Trayvon was minding his business with a bag of skittles, he was racially profiled by Zimmerman who followed him leading to an avoidable altercation.  From this altercation, Zimmerman used a weapon to kill a 17 year old child, which he pursued for no other reason then, the color of his skin and attire choice.

See racism is an inferior complex that resonates it's ugly head in many forms and kills daily. Racism is a perception of skin color that not only has the potential to cause murder but also try's to put victim's in a place of shame, humiliation, and loss of dignity.  To believe that being followed by a creepy human being is okay when that human being you feel is going to attack you is like saying it is okay for a woman to be followed by Zimmerman and have to submit to his inappropriate requests, even if they be physical.  It boggles my mind, any women in the jury would approve of this behavior! Even asking a stranger where they are going or why are you here is going too far!

Last I knew, I have the right to not respond to people who harass me.  I can physically defend myself against those that cause physical harm to my body.  Why would Trayvon be in a position to not do the same. Clearly, we know when some one is being racist and I am sure Trayvon knew that Zimmerman was picking with him because he was a young black teenager.

July 13th, 2013 we came together to protest against these Swiss cheese loop holes.  How can anyone truly believe that justice is served when so many are incarcerated and prison makes for big business.  Whose interest are the prison in when they are corporations with purchasable stock. The money invested in its ability to reach full capacity governs because the law states that a corporation should first and foremost maximize share holder wealth. Since this is the case the justice system is not for democracy or freedom but rather for a wicked profit driven purpose which is not different then slavery. Government funding increases the support of housing more inmates, parole officers, and other officials but systematically cuts education and jobs in many cities that have "high crime rates".  Configurationally, the message is clear, no justice, legislation that promotes racial profiling, decreased funding for education, less jobs, and increased funding for prisons supports poverty and minority incarceration.

TOGETHER WE STAND.... DIVIDED WE FALL...

Communities throughout the United States rallied together to prove that their will be no rest until justice is served.  Occupy Wall Street taught us something, we are a powerful when consistent and unified.  I remember witnessing Chase One Plaza close at 3 pm due to the fear instilled on them because of the protest outside. Unification and protesting scares the likes of men in powerful places.

To understand the system one should become educated in the history of where, who, and when many of the laws we live by today where enacted.  A system created from a primitive state of mind when racism, slavery, persecution, and oppression where openly rampant can no longer be tolerated as justice.  Justice is not justice when it comes to bringing a white man to the same fate his counter parts face for crimes committed in the same manner but lacking one equal characteristic, skin color. Gender is also treated differently when it comes to male and female human rights too and we are surely familiar with the role wealth and power play in our legal system.

Below are a few variations of protesting that occurred:  Feel free to use them!

The one I personally favored the most was the silent protest.  Remarkably people held hands in a circle with complete strangers, all for one purpose; to bring justice to Trayvon Martin and others who where killed twice; once physically and once from a inferior, unjust United States Court System. 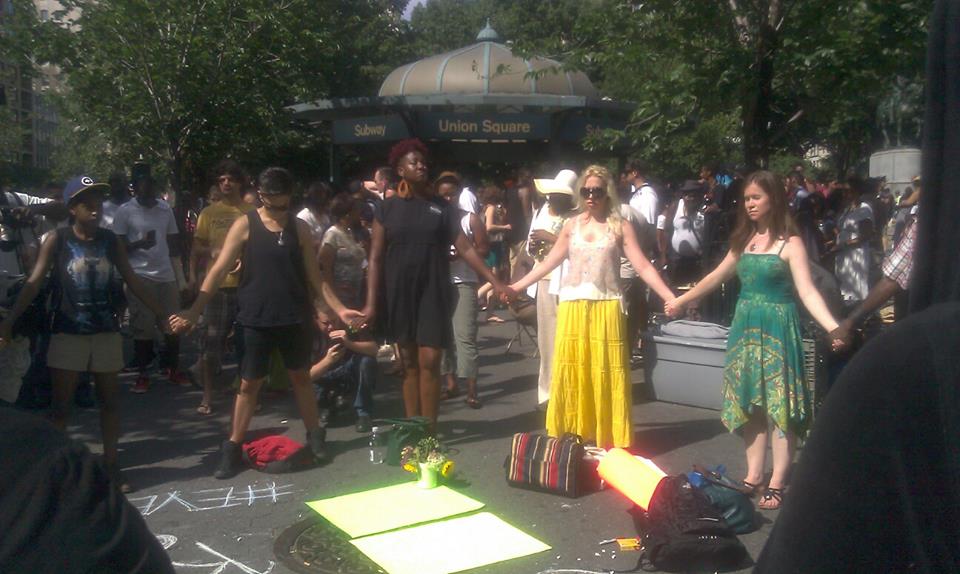 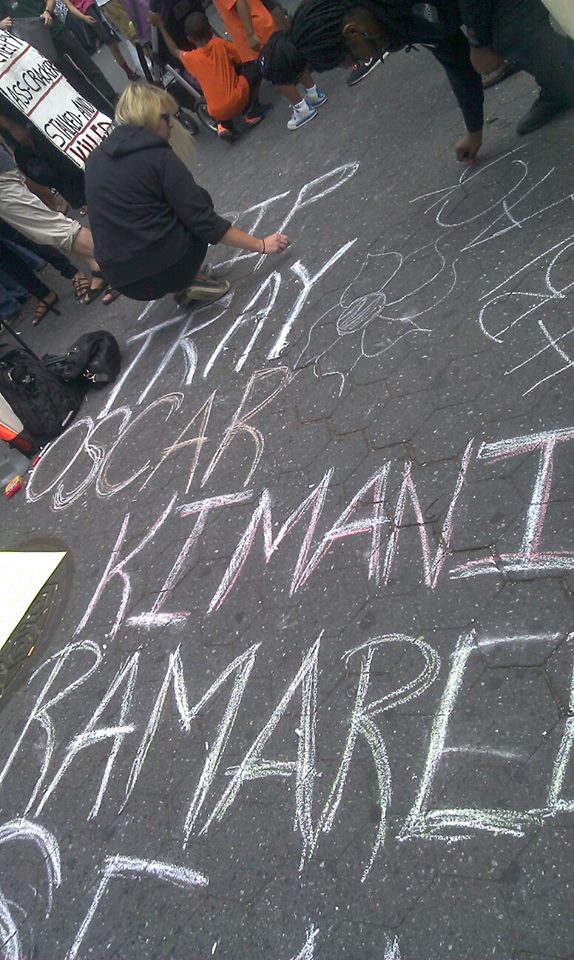 The next peaceful protest was walking with signs to command on lookers to consider the absence of justice in this case, I AM TRAYVON, YOU ARE TRAYVON, WE ARE TRAYVON, and TRAYVON IS MY SON, TRAYVON IS YOUR SON, HE IS OUR SON was repeated along with NO JUSTICE NO PEACE: 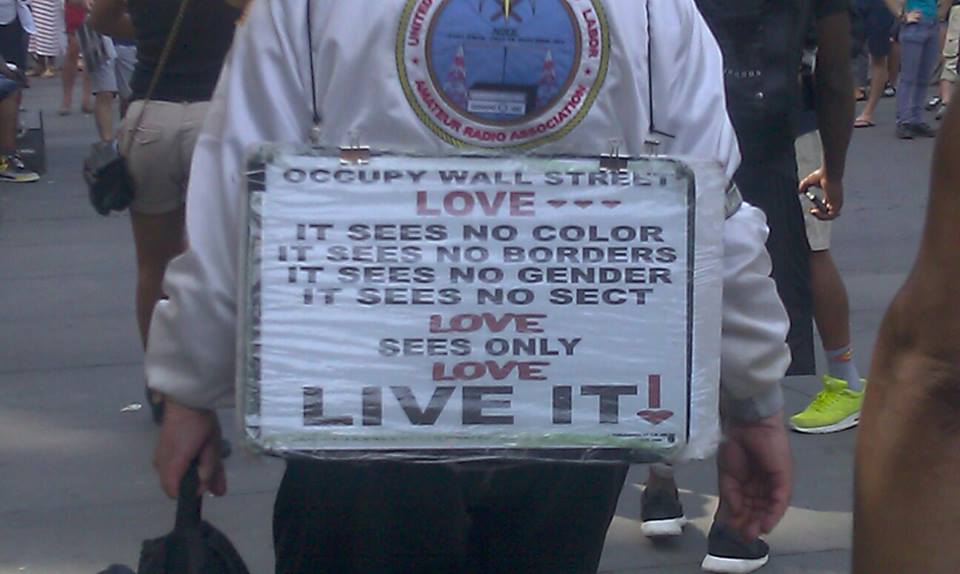 Collectively it is understood that solutions are needed to move forward. Days after today, those who believe in Justice for Trayvon must consistently stand up for change to occur.  Other laws and legislation that target black people like Stop and Frisk need to be detested and rejected too.  The fight is not over because the rally packs up today in Union Square.  All over the United States people are embarrassed  by a system we refer to as justice.  As some stated at the rally, we must refrain from telling other countries how to run their countries, based on the foundation that our country is run, we should be embarrassed for even attempting to do so. 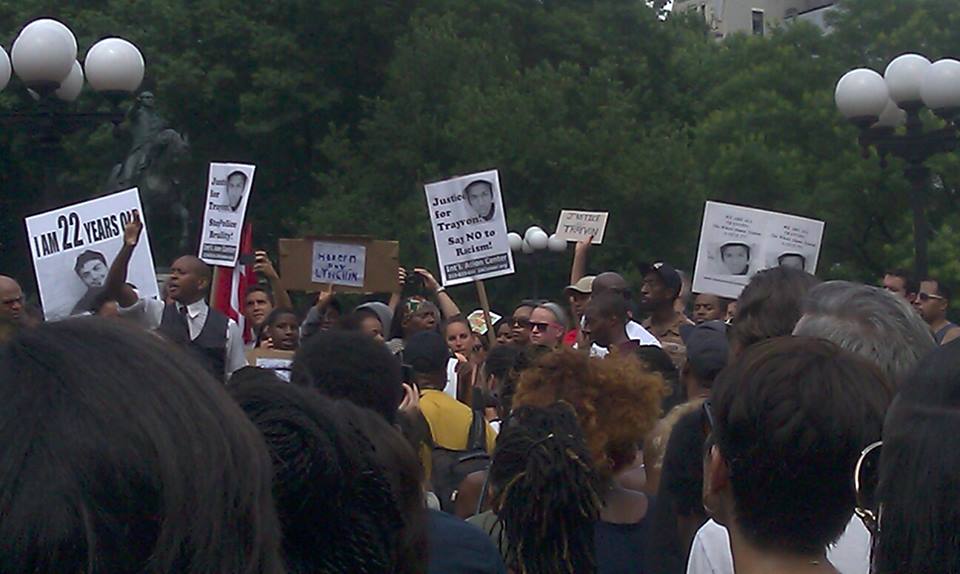 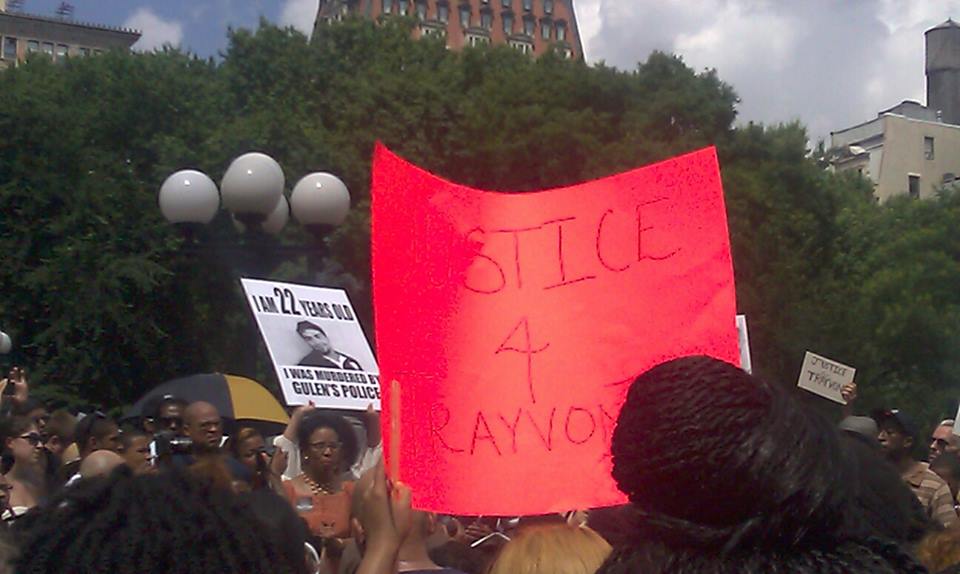 Also, social media is going to be the most fruitful way of channeling messages to others in order to exchange information, maintain involvement (#blackout) ie, and protest further change. It is widely known and recognized that corporations run media. Corporations have large sums of money at their disposal and when you think about lobbying, they are in a financial position to induce changes to their own self interests. In other words, it is the community who is going to be responsible to get information out to the public.  I call this becoming a citizen journalist and spreading the word through all lines of communication you have accessible to you.

The law that "let Zimmerman free" was created by American Legislative Exchange Council called "Stand Your Ground". Wall-mart one of the nations leading seller's of ammunition is on the ALEC's Committee and the NRA collaborates with ALEC to create laws. The jury was given a specific set of instructions based on the foundation of ALEC's law.  This organization is also run by the Koch brothers- according to Wikipedia

"ALEC has produced model legislation on issues such as reducing corporate regulation and taxation, tightening voter identification rules, digital due process [6] streamlining or minimizing environmental protections, reducing prison overcrowding[7] and promoting gun rights.[8][5][9] ALEC also serves as a networking tool among state legislators, allowing them to research the handling and "best practices" of policy in other states.[9]"

Once more, the Stand Your Ground law will effect the civil rights case that may be brought against Zimmerman because in the worst case, should family would loose, they could be required to pay Zimmerman for damages!

Additionally these men are among the richest in the world and have had numerous protests against their person, don't be afraid.  Use the money to support small, local owned businesses in your own community.  Economic independence means you do not have to rely on others.

You are not alone, major organizations are taking a stand. The NAACP is demanding that Zimmerman be brought in front of the DOJ to be prosecuted on civil rights charges.  With continued community engagement, the case will not be silenced.

If you want to become further involved in helping to maintain the energy behind the campaign, look to becoming a structured organization.  This will increase the effectiveness of your efforts, you can speak to your local council woman or man about funds that are available at the politicians discretion to give to community members in efforts to build up their local community. This is also good to know for business owners and non-profits who could use additional financial support.

If these funds are inaccessible to you, look to donor support which makes for even more freedom because the funds are not coming from the government.  Therefore, there is less paperwork and if the organization supports something that is not government friendly, this route will help to maintain the efforts of the organization including media access, video, legal consultants, ie.

Also, consider voting during smaller elections where you can elect city council people, comptrollers, ie that are more in line with your interest.  Remember, one day you may become a council person, mayor, governor, legislator, or even president yourself.  Politics is very important in matters such as this. You have the power to unite, get involved, and become the change you wish to generate.